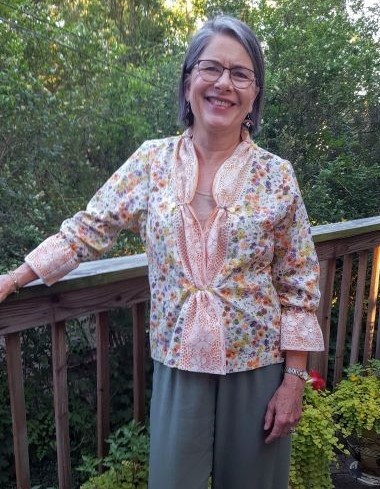 Thanks to our friends at Classic Sewing Magazine, our wardrobes for summer have been replenished with some of the jacket/tops featured in the current issue.  When I began planning the article, I ordered several pieces of cotton lawn from Farmhouse Fabrics and there was one remaining piece.  The one remaining piece was destined to be included in Carrie’s new summer wardrobe.  The time was right to create this complex ruched band top to further extend the concepts in the Classic Sewing Magazine article as the weather heats up.  My Liberty of London lawn blouse featured in the magazine and in the previous posts Hot Summer Sewing and Trendy Bell Cuffs was the starting point for Carrie’s ruched band top.

Carrie’s Tabula Rasa Jacket pattern had already gotten a summer makeover for her Cotton Lawn Parrots shirt, so the altered pattern worked perfectly for this project even though they look nothing alike.  That, of course, is the beauty of the versatile Tabula Rasa Jacket pattern and its Band Variations pattern.  Starting with one basic pattern the possibilities are endless.

Plan, Cut and Construct the Top

The entire top was made with the lovely floral lawn print.  The stash lace was to be used for the ruched neckband and hopefully a cuff accent. It was not a very long piece but has a nice crisp hand and would, therefore, make a dramatic collar with an underlining for the full impact of the lace.  After testing a number of underlining fabrics, the choice came down to two cotton gradation fabrics from SewBatik.  I let Carrie pick between the green and the orange fabric; she chose the orange which looks great with the little yellow buttons and several of her new pairs of pants.  These color gradation fabrics are perfect for a project like this, the subtle shading keeps the details from becoming boring.

Once the jacket length was established, 26 additional inches of lace remained.  That meant 13” available for each sleeve.  Not enough for the bell cuffs on my ruched top, but certainly enough for a widened sleeve with an elasticized casing to draw in the cuff and complement the ruched neckband style.

The band pattern calls for one continuous width of fabric, wrapped around the neckline, secured and then gathered.  Here, because the lace had an interesting border, two 4” wide bands were created as freestanding layers.

Before attaching the bands to the constructed top, I supported the front opening with a 1″ strip of fusible interfacing.  The cotton lawn fabric was quite light and the two layers of band were heavier, so the interfacing supports the garment successfully.  The cotton underlining band was finished with a baby hem and then attached as usual to the jacket.

Test the Fit – Adjust if needed

Then the fit was tested.  We decided it needed to be made a bit smaller in the upper chest area.  The alteration, moving the band a small amount toward the shoulder, really helped smooth out the fit.  When using a new band variation, be sure to test the fit and make any little tweaks that are needed to support the new detail.

The altered seam allowance was clean finished with the serger and then blouse with attached underlining band was hemmed.  Next the lace, which had also been clean finished along the hemline, was positioned around the front, carefully pinned, and topstitched in place.

Once the lace band was secured on the top, the ruching needed to be planned and then executed.  I used safety pins to test ideas for both the placement and finished width of the ruching.  Carrie approved the best positioning and suggested she would like to have just one closure at the ruching closest to the hem.

I created small fabric tubes from the lawn print to cover the ruching stitches.  Then working by hand, I placing two rows of gathering stitches in the double layer collar at each designated location.  Next, I covered the stitches with a loop of the lawn tubing that originated on the under-side and wrapped around to the front.  The tube’s raw edge was turned under, tacked in place and covered with a button.  On the lowest, right-side ruching, I added a little loop at the outer edge of the tubing so it could connect with the button on the left side.  It worked and nicely closes the top when Carrie wants it to stay closed.

Ready for a New Look?

What’s on your sewing table?  Have you pushed the envelope of a detail you have added to a previous sewing project or made it for a new season?  Keep an eye on our social media this week for details of how the cuff was created.  It is a fun finish to a very sweet summer Tabula Rasa.