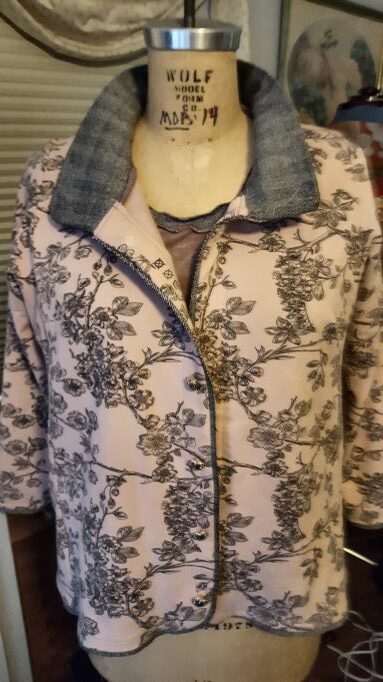 At the top of my sewing to do list for many months was to make this pink cardigan with my Tabula Rasa Knit Pattern and the Twin Set Variations.  The soft pink French Terry printed with cherry blossoms had been draped on the dress form from the day it arrived from Stylemaker Fabrics in Spring of 2021.  I loved it, collected some complimentary fabrics, sketched ideas and ordered some buttons as sweet as the fabric.

There is something about fabric that you really love, even when it is destined to become a glorified sweat shirt, that makes it hard to commit to the cut and sew process.  So other fabrics were draped on the form overtop this lovely pink fabric, projects designed, cut and finished.  In February, the doldrums of winter spurred me to action.  The time had come to actually do this work.

It is my Tabula Rasa Knit pattern with the Tailored Cardigan details from the Twin Set Variations, but there are a couple of tweaks we will look at closely.  The tailored cardigan pattern includes a narrow stand collar and a fold back front facing.  I wanted the front to close and feature grey flat piping edges, so a separate facing was created to support the planned closure.

The romantic nature of the fabric led me to design a softer collar than the Tailored Cardigan design.  The original 1½” deep folded collar was expanded and divided into an under collar with a 2½” finished width and a gathered upper collar that was cut twice the width of the under collar.  The pink upper collar was gathered by machine on each end (the center fronts) and in the center back.  Once gathered, it was stitched around 3 sides to the under collar, which was cut from the grey knit that also appears as the flat piping edges of the cardigan front, hemline and sleeve cuffs.  The grey knit was interfaced with Envy Silk, too.  The grey fabric is a two sided ponte, scraps from my daughter’s Waterfall Cardigan.

When the cardigan’s construction was complete, I decided the collar was too amorphous; the gathers needed to be anchored on the outside with stitching.  It could have been done on the machine, my usual default when sewing knits, but this time I used hand stitches to keep the collar soft and lofty.  Hand stitches were also used at the shoulder seam to stabilize additional gathers into place and to anchor the under collar to the upper collar simulating understitching.

The buttons are only decorative. After making some test samples of buttonholes I decided to use large nylon snaps to actually close the cardigan.

When the pink printed terry was purchased, another French Terry in rose colored tie dye was also acquired in the hopes they would work together.  While it did not make it into the cardigan, I mixed it with the cardigan’s leftovers for a terrific little Tabula Rasa Tee finished with serger rolled edge finishes.

Make clothes that you want in your wardrobe

As our period of isolation gives way to more time out and about, it is the really casual clothing styles I find lacking in my closet.  This cardigan really expands my selection as there are already grey work out pants, black pants and black and grey tees and tanks that feel refreshed with this cozy little knit addition.

Are you sewing casual knits? What have been your favorite features?  Do you want to sew some knits with us on retreat?  There are still a few spaces left April 7 and 8 at our Sew Successfully Retreat.  We will encourage you and help you plan for the details you want on your knit tops.