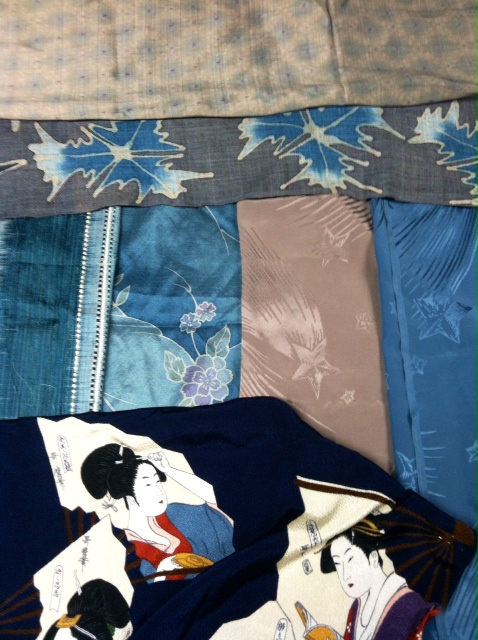 As I am sure you know by now, I love to sew and I love to collect fabric.  One of my collections has been on my “wish I had time to sew” list for several years.  It is a group of deliciously drapey blue and taupe fabrics destined to become a pieced Tabula Rasa Jacket.

On several previous occasions I have pulled the pile of fabrics off the shelf to begin the design and sew process and gotten stuck in the design phase.  Two years ago I decided I needed more fabric options, so the fabric moved into the “find things to match” pile.  Once I gathered enough fabric, I decided to foundation piece the jacket so I was delayed by the need to order silk crepe de chine for the foundation and lost momentum.  Last week when I realized that labor day weekend was on the horizon, I pulled it all out again and hung it on the dress form to get my design mind moving.

Last year I wrote in this blog about my efforts to take a break from my “sewing work” on Labor Day and indulge in a little “sewing play”.  I put aside all the other projects in the studio to focus on these fabrics and the process of soft foundation piecing.

I had sketches in with the fabrics that dated to each previous attempt to design and sew this jacket.  They were a great baseline to begin to build the jacket.   From my pattern file I got out my complete set of grid Pelon pattern pieces and went to work.

Almost immediately three questions arose and needed answering before I could proceed:

I set about to answer the first two together beginning with the silk batik from Mekong River Textiles.  It was destined to be the sleeves, some sashing and part of the band, but the fabric was narrow.  I used my grid sleeves folded up along the “cut here for a cuff” line to quickly assess that there was enough fabric.

The vintage shooting star jacquard,in both blue and taupe, are oddly shaped vintage pieces.  I hoped they could be laid on the foundation to form the bulk of the front and back.  They would also become the base for the geisha appliqués, so their configuration depended on where the geishas would fit on the jacket.

enough of each fabric.

The blue striped silk ikat, also from Mekong River Textiles, was destined to be side panels and the accent dividing the sleeve/side from the jacket body.  These chunks were  leftover from a previous jacket project.  I placed the grid pieces onto the fabric and was happy to find I could get each side perfectly centered in the ikat with long striped sections leftover for the side seams.

The taupe and purple silk ikat and the grey painted hemp will be used for the band, sashing and other accents.  A few quick measurements let me know that I had enough of each of these lovely Mekong River Textiles as well.

I heaved a big sigh of relief. That was enough for the first vacation sew day and I did not sew a thing. But, all design decisions were confirmed and I was ready to press and cut the next day.

Over the next few months I will write additional posts about day two, the appliqués, day three, the foundation piecing, and day four, the finishing touches.

Did you sew over the holiday weekend?  What did you work on?  Did everything take longer than you thought it would?  That often happens to me so now I try to plan in that extra time.

Based on the crowd at the Jo Ann Fabrics cutting counter on Friday afternoon and Monday morning, I believe that many folks were sewing for Labor Day. Hope everyone is as pleased as I am with the results of their labors.