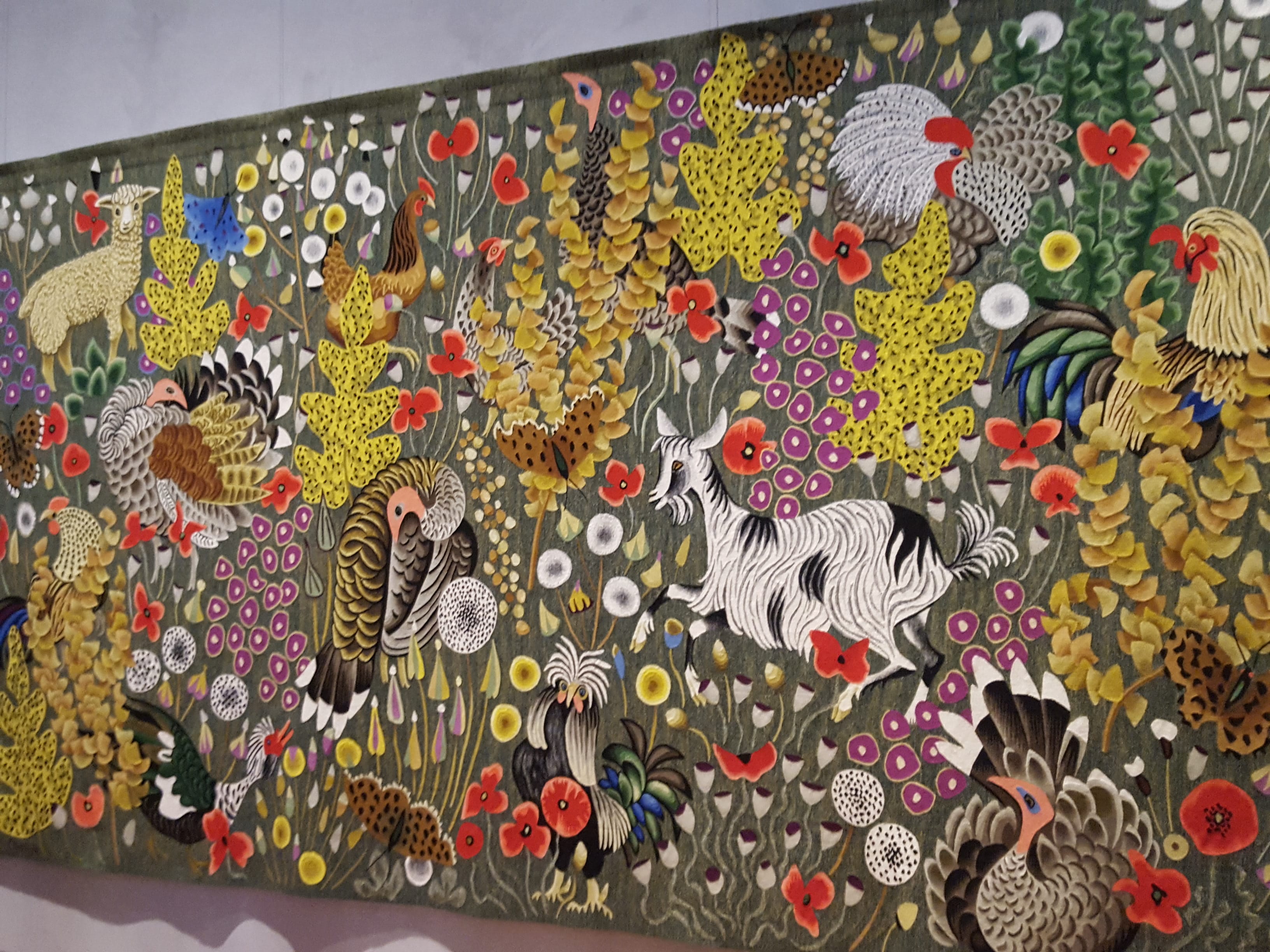 Tapestry is an ancient art form but it can be modern too.  During our La Cascade adventure we visited the Dom Robert Museum to see the magnificent 20th century tapestries designed by a local monk.  I wanted to share with each of you this inspirational feast for your eyes.

Dom Robert was born in the early 20th century.  After attending art school in Paris and working briefly as an artist he returned to the French countryside and joined an order of Benedictines.  While he participated in the community life of the Monastery, he also continued his artistic endeavors, drawing scenes of the area’s flora and fauna.  His artistic and spiritual inspiration was often drawn from the natural world.

As his body of work grew, so did is notoriety as an artist.  The small sketches of the natural world became large murals, many of which were ultimately woven into tapestries at the Tabard workshop in Aubusson.

The Don Robert museum which is located in Soreze, France is just 2 KM from the La Cascade Retreat Center preserves and exhibits the work of Don Robert, rotating the exhibited tapestries every 2 years.  The museum’s building is an old Abbey school that has been refitted to present the tapestries beautifully.

The first step in making the tapestries was to take a mural and transcribe it into a full- size cartoon.  These are the maps used by the tapestry studio to create the woven wool masterpieces.  Dom Robert would make a black and white reverse drawing of the mural, then he would divide each element by color and label the color sections with the number of the yarn to be used.

The process is the same one used by tapestry weavers in previous centuries.

The results are rich and textural, but the designs are modern, occasionally whimsical and always colorful.

It is recorded, that he had periods of conflict in his monastic life, due to his personal success as an artist.  But he did not abandon his art, adding to his Four Seasons series and also exploring sea life, themes from the Bible and accepting commissions from houses of worship.

Seeing his work develop through the sketches, compositions, cartoons and finished tapestries was so illuminating and timely as the La Cascade participants were considering their development as creative stitchers and artists in fabric.

Dom Robert’s modern sensibility of composition and use of color will certainly serve as an influence on my own work though I doubt I will take up tapestry making.

How lucky this lovely museum is so close to our home away from home in France.  Maybe you will consider visiting them with us in the future.

Come sew with us this summer at our Baltimore based Sew Successfully August retreat. There are still spaces at this casual retreat, our most reasonably priced community sewing event.  It is a great way to move your stitching up a notch.

Read more about Dom Robert and the museum at these links: http://www.boccara.com/en/tapestry/moderne/tapisserie-de-dom-robert/