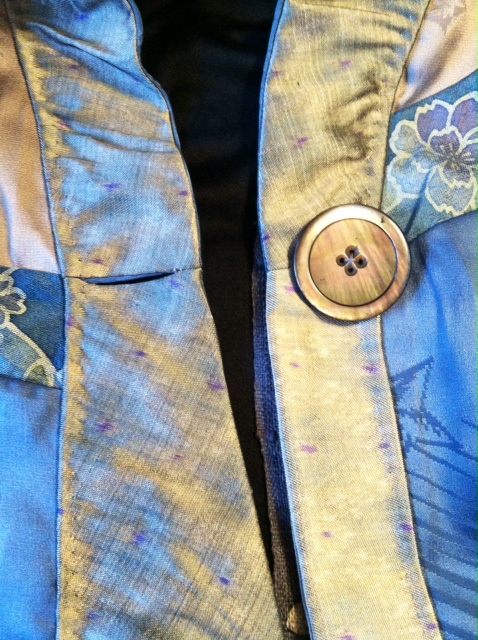 Today is the final post about the Geisha Tabula Rasa Jacket (TRJ) with a close up look at the button front double band.  A careful look at the background sketches in the Labor Day post shows an asymmetrical front hemline.  The more prominent and recent sketches include a shaped band designed to enhance the hem’s asymmetry.

I know that complex bands on soft jackets can be challenging.  Bands with buttons usually need support that can make the band stiff against the drapey body of the jacket. Hence, my decision to stitch and flip a stiff painted hemp base band with a soft flounced outer band in ikat and jacquard.

I divided my TRJ band pattern into 3 sections to allow for an inseam buttonhole on the right side and a seam to support the large button on the left side.  These seams were designed to line up with the asymmetrical front piecing.  The lower right band was expanded to a triangular shape to enhance the asymmetry of the jacket.

These patterns were used to cut the band along the selvage of painted hemp.  They were stitched together to form the single layer base band.  After testing the band on the jacket for buttonhole placement and hem length, it was set aside. All 3 pattern pieces for the outer band were cut from the taupe and purple silk ikat.  I had hoped to cut the facing side of the outer band from the blue shooting star jacquard, but there was only enough fabric to face the neck section.  The taupe jacquard was cut to face the straight left side and the remaining blue batik (of the sleeves) was cut to face the right flounce.  Both sides of the flounced band were constructed, without interfacing, leaving the inseam button hole open on the right side.  Then they were pinned and stitched together along the outside edge and hems.  The band was trimmed, turned and pressed carefully to shape the soft flounce.

This outer band was positioned on the jacket right sides together.  It was pinned carefully to place the button hole and button support seam at the piecing junctures on the jacket front.  Slowly the band was machine stitched into place.

I put on the jacket and was pleased to see the sizing and placement of the band were spot on.  I trimmed and overlocked all the layers of the front band/jacket seam together, creating a very clean and narrow seam allowance.

The bands were then flipped and gently pressed away from the jacket.  I pinned the bands together to encapsulate the serged seam allowance between the base and outer bands. This was slow work in order to keep the outer band flounced on top of the flat base band.  Finally, I hand-pick-stitched the two bands together so only tiny, evenly placed stitches show all around the band.  The hems and buttonhole layers were also hand stitched together and the button was attached, capturing all the layers of the button support seams.

What a project!  I was so relieved when it was complete and I was pleased with the results.  All that effort for a dramatic band left only enough energy and fabric for a simple cuff with silk ikat on the right side of the sleeve and painted hemp on the underside.

To keep it on the soft side, the inside hemp cuff was Hong Kong finished with lining along the raw edge and stitched into place.  A simple pleat and decorative button added the final flourish.

How do you celebrate the completion of a complex project?  I put this lovely TRJ on my dress-form and smiled happily each time I walked into the studio.

Then, in October, I modeled it in the ASDP 2015 fashion show, The Art of Design, in Minneapolis.  It felt fabulous, but you can be the judge of how it looked.