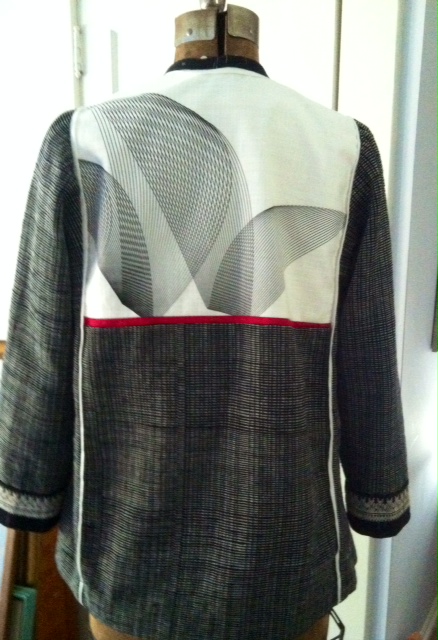 Today we will take a look at a fabulous jacket created by my student and friend Judith.  We have collaborated on several Tabula Rasa Jackets  (TRJ) and many contain textiles Judith acquired during her exotic travels.  The central element of this newest jacket is a tea towel of the Sidney Opera House, the only textile she found to tempt her in Australia.

She collected other fabrics used in the jacket at the Mekong River Textiles spring open house, JoAnne Fabrics & Crafts and A Fabric Place.

Because she is very petite, it became obvious quickly that the towel would need to be divided so it could appear in several different places on the jacket.  This always makes a project really stressful since there is only one towel!  Armed with her tried and true TRJ pattern we explored a variety of possibilities before settling on the placement.  I believe we used every inch of pattern.

The towel sections were underlined in cotton batiste before each jacket section was stitched together.  Special attention was given to the pocket composition and placement.  A group of fabrics were stacked to frame in the towel’s title.  Judith used the exterior kangaroo pocket from the Band Variations & Pockets pattern.

Once the piecing and pocket of the front and back were complete, flat piping in white linen was added to each side seam and to the front opening to give the jacket a light look.  Judith chose a narrow binding as a band, described in the Band Variations pattern as well.  The simple band cuffs were a repeat of several trimming fabrics used in the jacket.  These directions are in the Sleeve & Cuff Variations pattern. She fully lined the jacket with light ivory silk crepe de chine for a smooth finish and to neatly cover the piecing seams on the front and back.

Finally, the closure became an added challenge.  Judith had purchased some very interesting beads on a trip to Orcas Island and she was determined to include them on the jacket.  We envisioned them as buttons and simple tie ends before settling on the loop and long beaded tie that is decorative if it is open or closed.

A good bit of her advanced jacket planning and sewing happened during our Sew! Let’s Get Dressed Retreat in August.  I believe Judith had fun involving the other passionate sewers who were working nearby in her design conversations, but you can feel quite sure that the final decisions were all hers.

Judith looks fabulous in her jacket but she wanted the blog post to be about her process and the choices she made while designing this wonderful, artful TRJ.   She said” in telling the story of the jacket’s creation, the focus is the Tabula Rasa Jacket Pattern and how it inspired the person using it.”

Carrie and I continue to be honored and inspired by each of you as you work with the pattern and its variations in both simple and complex ways.  You truly inspire us and we hope Judith’s jacket inspires you too.